Pride and Tourism in Tel Aviv 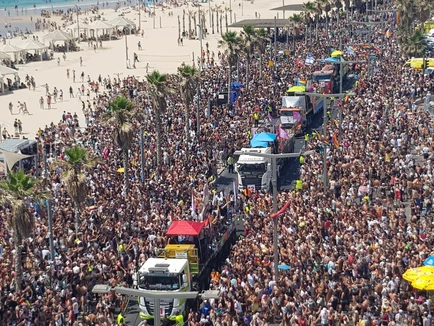 What do Neil Patrick Harris, Jenifer Lopez and Bon Jovi have in common? They all love Tel Aviv! NPH was here last week as the official ambassador for the annual LGBTQ Pride Parade, and both J-Lo and Bon Jovi are performing here this summer!

Tel Aviv has long been the entertainment and cultural capital of Israel, attracting tourists from all over the world. The economic and cultural effects of these tourists can be felt year-round, but they are most intensely felt during major cultural events. Tel Aviv specifically has a thriving tourism industry even in relation to the rest of Israel. It hosts international events like Champions League games, concerts and even Eurovision which took place just last month. Eurovision and Pride week brought in tens of thousands of tourists to the country and Tel Aviv in particular.

The most recent cultural event – Tel Aviv’s annual LGBTQ Pride week was last week. This year the festival brought in over 250,000 participants from all over Israel and the world. Over 30,000 of these participants came from abroad specifically for the Pride Parade. Every restaurant, bar, and club was full for the whole week, making the city’s economy boom. The feeling of acceptance for Pride can be felt in the weeks leading up to it, with every corner of the city draped in rainbow flags hanging from both apartments and businesses alike.

The impact of the Pride festival is immense economically but can also be felt culturally. The acceptance of the LGBTQ community is like an oasis in the Middle East and leads to people flocking to Tel Aviv. It helps to promote Tel Aviv as an exciting, but also relaxing destination to travel to for vacation and only increases the number of tourists coming to the city. It also leads to the LGBTQ citizens of Tel Aviv feeling truly accepted by the community. This acceptance is hard to find even in other developed countries which shows Tel Aviv’s uniqueness. This cultural acceptance leads to a lot of businesses, especially technology companies, feeling comfortable investing in Tel Aviv as opposed to less accepting areas in the Middle East.

The impact of so many tourists coming to Tel Aviv and falling in love with the city can be felt strongly in the real estate market. This, and the fact that Tel Aviv is also the Tech hub of Israel, leads to a strong interest and need for housing. This demand has contributed to an over 100% increase in residential prices in the last decade. This has proven that real estate in Tel Aviv is a great investment due to the small supply and consistent demand. As long as there are tourists coming to Israel and wanting to stay in Tel Aviv, then this strong demand will remain. Currently, there are over 13 thousand rentable apartments according to AirDNA and they were all full last week – helping to create a huge impact on raising rental prices for people investing in short term rentals.

As long as Tel Aviv stands as the leader of LGBTQ rights and continues to support these major community events, the city will continue to see a massive influx of tourists, and a corresponding increase in foreign money coming into the city. These tourists continue to be an important aspect of the Tel Aviv economy and will also come back even when there is no major event taking place because there’s always more to see and do. Let’s be honest, it’s a great city, find out for yourself . . .